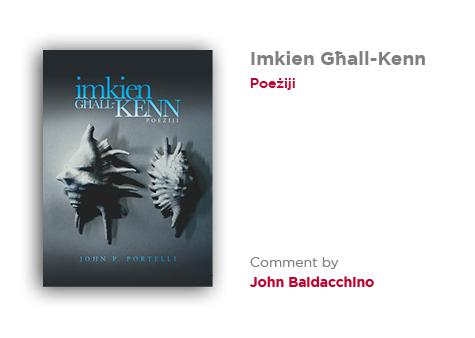 The Consolations of Displacement

Knowing John Portelli’s work well, I am never sure if he is actually a pilgrim, a lost wanderer, a bedouin, a converso or even a corsair. Maybe he is all of them, but surely the American on a deckchair who confesses to him: “you’re undoubtedly a Jew’ (int żgur lhudi, p. 61) was not that far off the mark, by the same token that he is taken for a Palestinian in Haifa. (p. 52)

A collection of fifty-one poems written in eleven different countries, Portelli’s Imkien Għall-Kenn offers no real comfort except that of nomadic displacement. Whether by imkien he means somewhere or nowhere is not clear; just as he goes all hermetic on his readers when he speaks of kenn which seems to imply some kind of shelter from the nomadic existence that he leads (as an academic, a migrant, a poet … ). Perhaps, we have to wait to ascertain whether this refuge of his could ever turn into a curious sort of haven. However, I would be more inclined to suggest that his choice is to move within the interstices of such states of mind without impressing any fixed abode on his readers.

As one is indulged by what Portelli has on offer for his readers, one cannot but dance to a rhythm that is as furtive and illegal as the zeibekiko (once the manges’ favourite dance, those bandits to whom modern Greeks still pay homage with the deep nostalgia and longing that bring to mind the mesmerising voice of the late Dimitris Mitropanos and before him the legendary Vassilis Tsitsanis). And like those who scoured the Mediterranean—from Odysseus to Aeneas, Erotokritos to St. Paul, and all manner of refugees seeking some meaning in life, Portelli invites us to travel through a region that implicitly defies the reverence by which we mistakenly worship the arts as if they warrant such piety.

Portelli’s pain is not only intended to reveal a paradoxical state of affairs. It is also meant to throw us off guard, as we read: “bejn hawn u hemm / baħar jaqsam / id-dar mirduma / bagalji minsija.” [hither and thither, a sea’s divide, a house buried, luggage forgotten, p. 112] If indeed such journeys are borne out of a restless sense of return, a homecoming; such a sense of homecoming does recur, but only because what is promised is an eternal anxiety caused by the same place we hopelessly yearn for – knowing very well that such a place does not exist.

Because hope is often dishonest, Portelli refuses to simply provoke his readers. Rather, he treats them to a bitter coffee in the sweet whereabouts of Palestine. (“jinżilli għasel dal-kafè morr / f’kull għodwa tal-palestina” [it tastes so good this bitter coffee, everyday in palestine, p. 62]); as if one could expect anything sweet from the history of a region marked by tragedy and hatred, by a flow of refugees, fleeing endless cycles of wars and tragedy (“das-serbut ta’ rifuġjati” [this line of refugees, p. 62]).

Reading Imkien Għall-Kenn one imagines a long itinerary, from North Africa to the Middle East, to the Balkans, round to Italy and Spain, and back to that origin, which once Pawlu Montebello fashioned on the navel of the Great Mother Inanna, l-Omm il-Kbira, whose womb was carved out of limestone in Ħal Saflieni. But then, just as you thought that Portelli would be, as it were, of this land and this land only, off he goes to Quebec City, only to be shaken by a shooting, with six dead and two men arrested: “allahhu l-karim/fejn hi l-ħniena/tal-insara?” [God is generous, where is Christian mercy? p. 98]

Yet it is wrong to peg Portelli’s work on the errant ways by which his beautiful poetry takes us around those places and waters that bring us so much sense of belonging. I’d rather close this brief reflection by drawing the reader’s attention to the aesthetic of John Portelli’s work.

John’s poetics come in a regular flow, and yet there is a gradual unfolding of aesthetic considerations which he accrues through all his books of poetry. I find this inherent in how he plays with Maltese without being nebulous or impenetrable. Portelli has a way of using words that we all use in common parlance, but which come in combinations that betray something other than what we think they say, though without being unnecessarily mysterious. Portelli’s work is not hidden even when I do sense a hermetic character that I would attribute to formal decisions.

Portelli’s poetic form is invested in surprising elements by which he depicts a simple situation in miniature form through wit, sometimes with humour, but always moved by an acute sense of probing and curiosity. Beauty is worn on this poet’s sleeve, and this is where I would not hesitate to call Portelli’s work as being characterized by an honest kind of beauty by which readers are immediately taken. Yet this honesty is never benign—just as the comely waters of the Mediterranean always have a way of being surprisingly forbidding.

John Baldacchino is a Professor of Art & Education at the University of Wisconsin-Madison, USA.